5 Ways Twitter Has Changed Business over the Last 10 Years 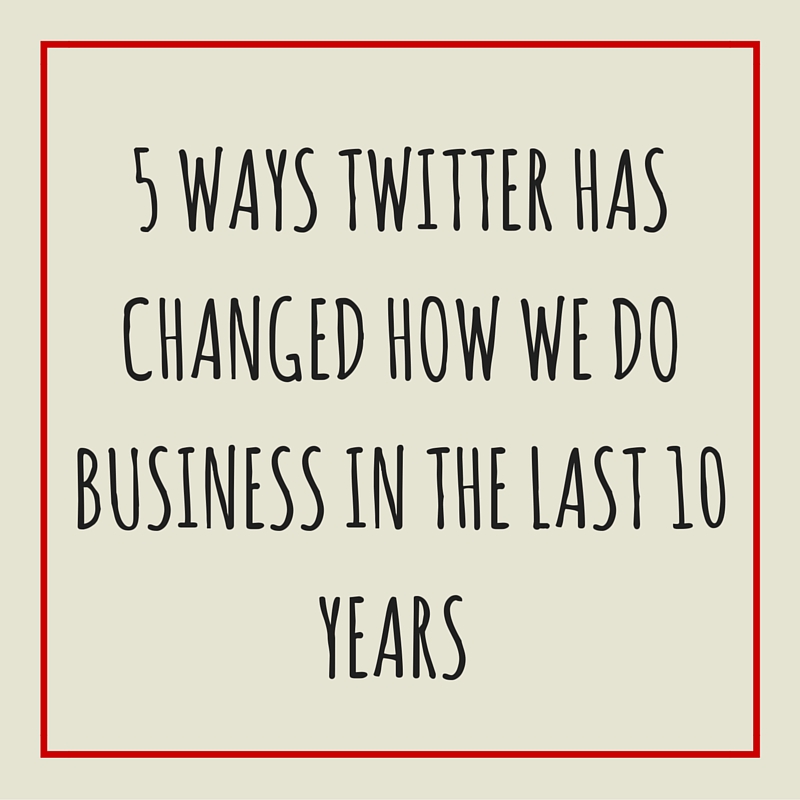 Twitter is ten years old! Since the first tweet on the 21 March 2006, the microblogging platform has exploded. It may not be as big as Facebook in numbers, but there’s no denying that the 140 character box has changed the way we interact. It’s completely transformed the way we consume media and news, with some saying that Twitter has amplified the conversational and the mundane to a global stage. There’s been gaffes, weddings and trolls, oh the trolls.

Here are 5 ways that Twitter has changed Business over the Last 10 Years:

Most importantly for businesses of all scales, it’s changed the customer/business relationship irreparably. Businesses are more vulnerable than ever to negative feedback turning into a viral escapade. Consumers are much more likely to complain on social media, and many companies are using this to their advantage by offering remuneration and sparking viral attention.

Customer care is increasingly speed oriented, as many people expect a reply within 2 hours. Alongside the rise of social media generally, Twitter means that customers are bypassing endless on hold music, customer service desk queues and getting exactly what they want and when they want it! Happily, this means the opposite also; people are very open to leaving rave reviews online. A tweet of a meal or a mention of a friendly sales assistant also go a long way to building a solid brand image.

The biggest and most useful aspect of Twitter, and social media in general for business, is the opportunity to interact with your customers in a way that shows you to be approachable, human, and most of all – valuable! Businesses can keep track of their most loyal customers through social media. This makes rewarding loyalty so much easier and more genuine than a store loyalty card!

This ties in to the changing face of politics and activism online. Twitter can be useful to make large scale changes too and influence large companies – for example, Tesco, who in 2013 launched the “gay best friend” doll which sparked outrage, resulting in Tesco apologising and removing the item from shelves.

The PR disaster involved activists such as Peter Tatchell, who tweeted at the time: “Can @Tesco explain its G*y Best Friend doll? Why is the word gay censored? Why does the doll pander to stereotypes?”

I think this showed companies that they are accountable for their decisions and that the consumer isn’t going to let them get away with alienating people with their products.

Twitter introduced advertising into our social sphere. For large corporations, this changed the game; for small businesses it means it can be extremely difficult to bid for space against unlimited advertising budgets. Whether or not businesses actually use promoted posts, I think making us aware of the structure of Twitter has changed the way we do business and think about how we get seen and heard among the din of Tweets.

Finally, it affects the way the stock markets are predicted, with researchers claiming that they use Twitter to predict how stocks perform. Small business owners can get in on this too – make sure that you’re listening to what your followers are saying and doing on Twitter, and get a better idea of what they want to hear from you!

I’m not sure what the next 10 years have in store for businesses online. Some people predict the end of Twitter is nigh, as user numbers drop year on year. Others can see Twitter in our future. Whatever happens, it’s clear that business (and life in general) will never be the same again. And if this list has got you panicked about your activity on Twitter, don’t worry, because at least you’re not Ed Balls.