5 Things To Do When Launching A New Product/Service

Last week, I launched my new online course The Social Media Super Success Plan and exceeded my sign up targets!

So, I thought I’d share with you some of the things that help lead to a successful launch! 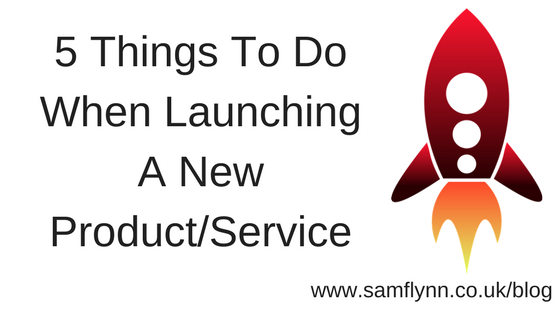 I’ve known that I would be releasing this course since around October last year, and that the majority of the launch would take place via email.  My focus from that point was to grow my list.  I’ve always had a side bar capture (see the 50 Things To Say On Social Media box either in the side bar on desktop or when you scroll down on mobile).  And this has generated a good number of email addresses for my list.  But I wanted to step it up.  I started doing more free webinars, with signups having to provide their email address.  I also repurposed one of these webinars, creating a recording that you could receive by filling in a webform (see top bar).  I also added a popup to my site, which has really increased sign ups too!  I grew my list by as many new signups in two months as I had done in the previous 12 months!

A ran a competition the week before the course was due to launch to win one of three free places on the course.  This achieved two things.  Firstly, you had to enter using your email address, so I grew my list again, but this time with people I knew were interested in the course.  Secondly, it allowed me to start talking about the course before it launched, and teasing people that it was soon to launch.  I ran a Facebook Ad for the competition to get it in front of a wider audience.

3. Set A Launch and Finish Date

I talked about the date the course would be available and counted down to it, including in emails (see below!).  The other thing I did for this course was set an end date for signups.  This wouldn’t be applicable to every product or service, but it worked really well for this one.  If I’d kept the course open forever, there wouldn’t have been a deadline to signup to and no rush to get involved!  You could do the same by limiting the availability or having a deadlined offer.  The last day that you could sign up was the one that I got the most signups!  So, it definitely works!

Of course, social media played a huge part in the actual launch.  I tweeted about it all day on the three days you could sign up and also did daily posts on LinkedIn and Facebook.  I also created some video content about the course, to increase reach.  And I ran a Facebook ad to people who had visited my website and who had watched the competition video.  Social media also played a big part over the months before the launch.  I have been posting more video content to increase my reach and show my expertise, which has lead more people to my website from social media, and to sign up to my lead captures.

In launch week, I sent 6 emails over 5 days.  Some might view this as excessive, but it’s not something I’d do every week and I only had a couple of people unsubscribe from my list.  The first email introduced that I was launching a new product on Wednesday and that I’d let them know more tomorrow (Tuesday).  The second then went through all the details of what the course included and told them what time to expect it to launch the next day.  The following email stated that the course was now live to sign up to.  Thursday’s email answered questions about the course and restated some of the elements of the course.  And, on Friday, the last day for signing up, I sent out two emails.  The first reminded them that it was the last day to sign up and again added in a couple of details about the course.  And the final email was a short one to say there was only two hours left to sign up.  With each email I sent out on the Wednesday, Thursday and Friday, I received at least one sign up.  So long as you’re not bombarding people’s inboxes every week like this, it’s absolutely fine to do it when launching.

So, that’s how I did my launch!  It’s the first time I’ve really planned through a launch rather than just sending out a couple of emails about a course, and it’s definitely something I’ll replicate the next time I release this course or a new one!